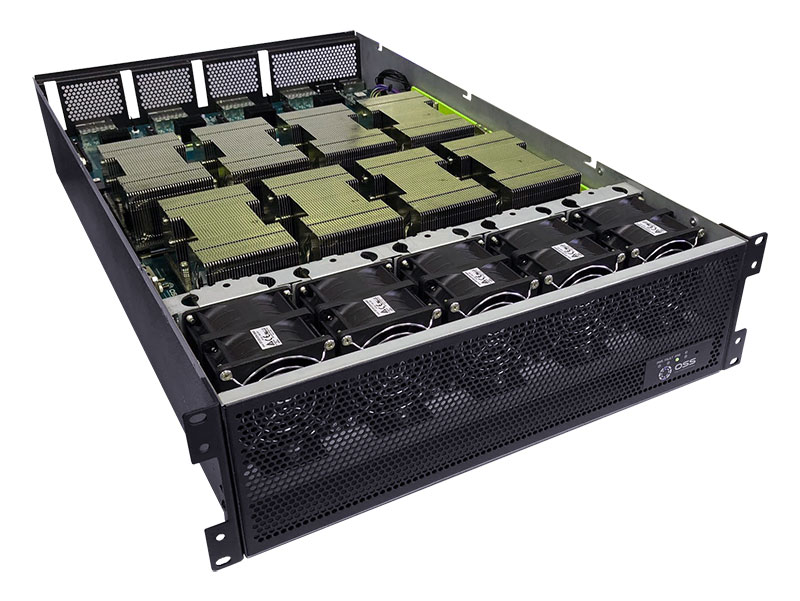 OSS, Marvell and NVIDIA Demonstrate Ideal Solution for AI on the Fly® Applications

One Stop Systems, Inc. announced availability of its new SCA8000 compute acceleration expansion platform for use with Marvell® ThunderX2® Arm® based servers.

In July, NVIDIA announced it was making available to the Arm ecosystem its full stack of AI and HPC software that accelerates more than 600 HPC applications and all AI frameworks. The stack includes all NVIDIA CUDA-X AI and HPC libraries, GPU-accelerated AI frameworks and software development tools. The SCA8000 is the industry’s only NVIDIA NVLink based solution available that leverages this NVIDIA CUDA support for the Arm processor architecture.

The SCA8000 is a 3U 8-way SXM2 expansion chassis designed to be installed in a standard 19 inch rack. It supports eight passively cooled SXM2 V100 GPU modules and has an additional 4 PCIe x16 slots to support options, such as 100/200Gb Ethernet, Infiniband or other IO and data acquisition cards. It can connect to an Arm based host server with up to four PCI-SIG PCIe Cable 3.0 compliant links at a distance of up to 100m.

“This new compute acceleration expansion platform demonstrates how OSS continues to be the leader in delivering the latest in high performance technology for mission critical applications,” said Steve Cooper, CEO of OSS. “We have worked closely with NVIDIA and Marvell to develop this industry-first Arm solution with NVIDIA NVLink capabilities, leading the market in enabling Arm and CUDA solutions and supporting our AI on the Fly initiatives.”

Gopal Hedge, vice president and general manager of Server Processor Business Unit of Marvell Semiconductor, said: “Our collaboration with NVIDIA and OSS marks continued advancement of the ecosystem for ThunderX2, the most widely supported Arm-based server processor. ThunderX2 with NVIDIA GPUs and OSS’s NVLink based platform showcases exciting new capabilities to meet the requirements for performance and scale of AI applications.”

The Supercomputing 2019 demonstration includes a 2U server reference platform with two 32-core Arm-based Marvell ThunderX2 processors running at up to 2.5GHz in Turbo mode and supporting up to 4TB of system memory. The ThunderX2 processors provide industry-leading performance per power and memory bandwidth and high core count with hyper-threading. The server is connected to the SCA8000 populated with eight NVIDIA V100 Tensor Core GPUs interconnected with NVIDIA NVLink. ThunderX2 based servers are available from OEMs such as HPE, Bull-Atos, Cray, and GigaByte.