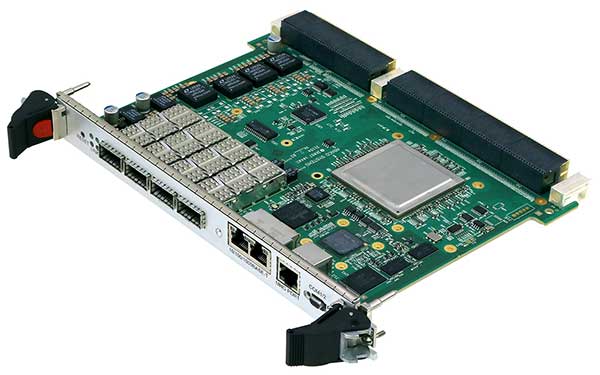 Abaco Systems today announced a significant upgrade for its NETernity SWE540A 6U OpenVPX VPX 40 Gigabit Ethernet Switch with the availability of a conduction-cooled variant, enabling the highest possible Ethernet speeds to be deployed in a broader range of environments – notably, those most susceptible to extremes of heat and vibration. Customers can now standardize on a single switch, choosing the most appropriate ruggedization level according to the planned deployment.

Advanced features and capability offered by the SWE540A include data center bridging to accommodate even the most data-intensive applications. SWE540A connectivity includes four QSFP+ (40GBASE-SR4/LR4) ports and two 1000BaseT ports to the front panel, and 40GBASE-KR4/10GBASE-KX4 with up to 39 rear I/O ports for data plane and control plane to the rear panel.

“The battlefield platforms of tomorrow will rely on the fastest possible network speeds to ensure the fastest possible transit of data between subsystems – not least those that gather field of operations data, turn it into actionable information and deliver it to where it’s needed,” said Peter Thompson, Vice President, Product Management at Abaco Systems. “This new variant of the SWE540A is designed for precisely those environments – delivering not only leading edge Ethernet speeds but also the rugged reliability that is critical to mission success.”