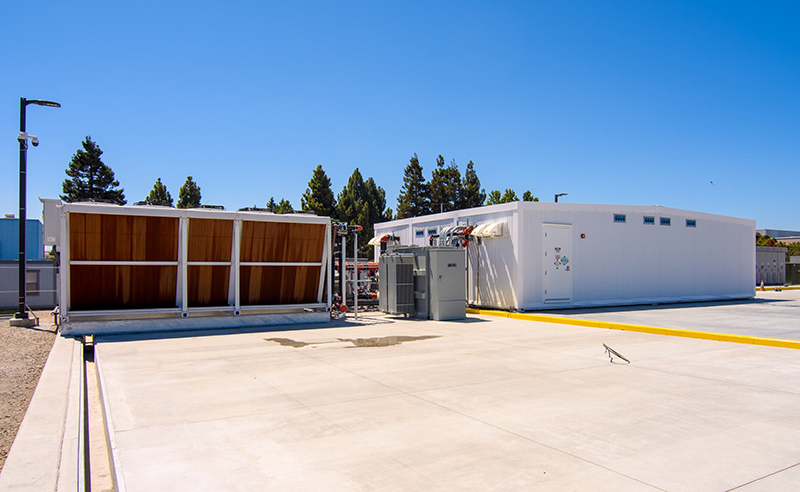 To grow its famous grapes, California’s wine country along with the state’s north coast benefits from the cooling influence of the Pacific Ocean and the dry summers characteristic of the region. That same climate also supports a very different “crop” nearby: NASA’s newest supercomputers and the fruitful research they make possible.

Specifically, it’s perfect for the individual units of the Modular Supercomputing Facility, or MSF, at NASA’s Ames Research Center in California’s Silicon Valley. By cleverly using climate to cool high-powered computers naturally, water use is reduced by 96% and electricity used for cooling by 91%, compared with running the same computer resources installed in a traditional data center.

Water that is heated by the computers in the module housing the Aitken supercomputer flows to the coolers, at the Modular Supercomputing Facility at NASA’s Ames Research Center in California’s Silicon Valley. Fans on top of the coolers draw outside air over pipes located directly behind the brown-colored material, called the evaporative media, transferring the heat in the water into the air and dissipating it into the environment. When the outside air exceeds 80 degrees Fahrenheit, the evaporative media is soaked with water that lowers the temperature of the air just before it blows over the pipes, improving the heat transfer on warm days.

The facility, which opened in August 2019, uses self-contained modules to house its machines – think “tiny homes” for big computers. People who participate in the tiny house movement choose for their living space to be small, with low energy demands, allowing them to save money and use fewer environmental resources. And the goals are much the same here.

So, while the MSF is leading the way in enhancing NASA’s high-performance computing, it’s also dramatically reducing the amount of power and water needed to cool a supercomputing facility.