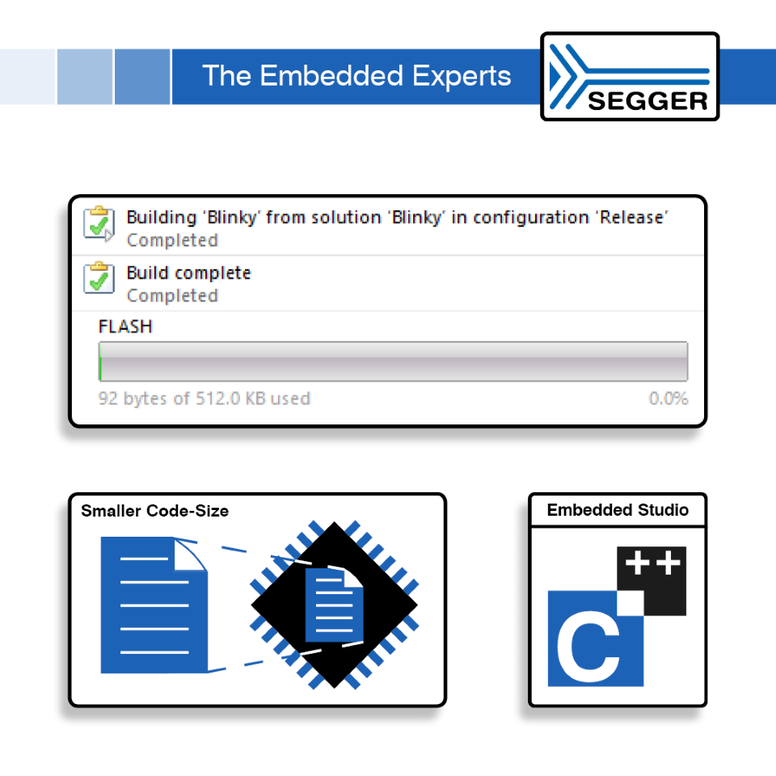 The newly released SEGGER Embedded Studio V5 for Arm processors comes with the company’s Compiler, Linker, Runtime and Floating-Point libraries included. All components are designed from the ground up for use in embedded systems and work seamlessly to help generate extremely small programs.

A program which blinks an LED – a ‘blinky’ – on a typical Cortex-M microcontroller unit can be written in C or C++, with a total size of less than 100bytes. Terminal output (printf) can be done in real time using RTT, SWO or semi-hosting with host-side formatting, keeping even the standard ‘Hello World’ program to no more than a few hundred bytes.

Just like SEGGER’s SystemView and Ozone platforms, Embedded Studio can be used on Windows, Linux and macOS operating systems – in keeping with the company’s cross-platform philosophy.

“This new version of Embedded Studio is truly groundbreaking. I have never seen a toolchain that produces such small programs, especially out-of-the-box, created by the project generator. Our compiler uses Clang with a new code generator developed directly by the SEGGER software engineering team. In balanced optimization mode, it produces code that is as small as it is fast. Our linker, startup code, runtime library and debugger are all tuned to get the most out of a microcontroller,” said Rolf Segger, founder of SEGGER. “Version 5 outperforms even my own expectations.”

Embedded Studio can be downloaded without registration and used free of charge for educational and non-commercial purposes, as well as evaluated (without code size, feature, or time limit) on all platforms.