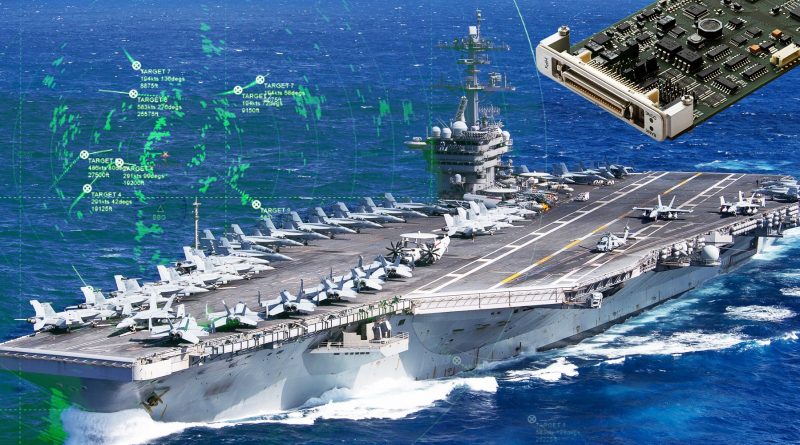 The AN/SYY-1 is the US Navy’s upgrade to the AN/TPX-42 system used for shipboard air traffic control. The new system will be deployed on all CVN-class aircraft carriers as well as on helicopter landing ships (LHA and LHD-class vessels). Cambridge Pixel’s technology will be used to process radar returns, extract radar and IFF plots and display radar video from the primary and secondary radar video on all the ships.

David Johnson, CEO, Cambridge Pixel, said: “We are delighted to be offering our modular HPx and SPx radar processing components into this technology refresh program. We have incorporated considerable flexibility into the radar interfacing and data processing modules which have allowed us to accommodate the needs of the AN/SYY-1 upgrade.”

Cambridge Pixel’s HPx-250 is a PMC-format daughterboard that fits onto a VME processor board. The card receives radar signals, including video, trigger, and azimuth, and passes the digitized and processed video to the SPx Server plot extraction software, which runs on the host computer.

For combined primary and IFF requirements, two HPx-250 cards are deployed on a single VME processor, with one instance of SPx Server software handling IFF decoding and plot extraction, and the other handling primary video plot extraction and video processing.

For the IFF video, mode tags embedded in the video are used to identify the interrogation mode to permit correct decoding of altitude and call sign data. For primary radar video, plots are identified as areas of video passing target-like acceptance criteria. Plots, along with digitized video, are passed out of SPx Server into downstream track processing and display.

Cambridge Pixel’s HPx-250 card is part of a family of radar acquisition and processing components that provide system integrators with a powerful toolkit to build server and client display systems. A wide variety of signal types and input voltages are supported on the card, allowing connection to a diverse range of commercial and military radar types including those from Furuno, Hensoldt, JRC, Koden, Raytheon, Sperry, Terma, as well as specialist military radars.