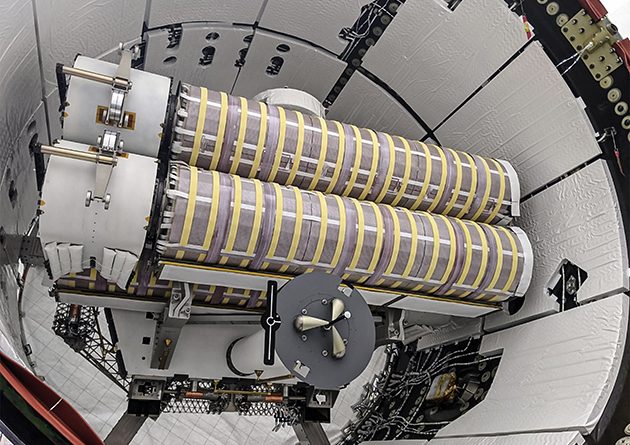 The new solar arrays are about half the size but twice as powerful as the original solar “wings” that convert the sun’s energy into electricity for ISS systems and research equipment. Stronger, more efficient solar cells from Boeing Spectrolab are supported by a structure that unrolls on its own without heavy motors. A total of six arrays will be transported and installed by the end of 2023.

The new arrays will increase overall power generation on ISS to 215 kilowatts, providing a 20 to 30 percent boost in energy to the ISS for years to come. They will leave the original arrays intact and generating electricity as they have done for more than two decades.

“The arrays fly in a challenging environment in low Earth orbit where they are hit by micrometeoroid debris and cosmic rays and also endure temperature changes of 500 degrees 16 times a day,” said Rick Golden, Boeing project manager for the arrays. “That’s why the added strength of each cell is so important. Also, they will maintain their power capacity throughout their life span to avoid any future power reduction.”

Although Boeing routinely supports ISS system upgrades, most of those are done inside the station, where system racks and equipment are installed to meet new or growing needs.

“The exciting thing about this upgrade is that we’ll actually be able to see it from Earth,” said Golden. “Space enthusiasts around the world can view the arrays with the right telescope as the ISS flies over.”

Combined with the new lithium-ion batteries Boeing also provided over the past couple of years, the six new solar arrays will complete a full ISS power system upgrade. With everything installed, the station’s electrical generation will be higher than ever before. That’s an important factor in supporting larger crews, more visiting spacecraft, and the addition of commercial modules slated to start arriving at ISS later this decade.