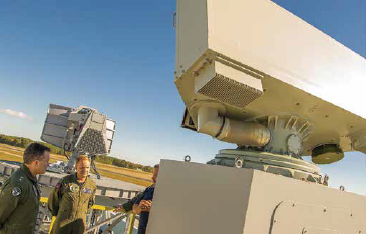 The need to measure real-world events continues to intrigue the mind. In a recent conversation with a scientist who had focused her career on measuring CO2, she described in laymen’s terms that she had created a “sponge” that would attract the CO2 molecules and by measuring the change in weight of the sponge, she could determine with precision the amount of CO2 in the air.

Like in the past, the combination of sensor readings brings together an array of measurements that draw a picture. So just as advancements in RADAR enabled us to both understand where the threat is, and further evolved to determine the speed and direction. Today’s sensors paint a dizzying array of combined measurements that better portray the whole picture. This idea of the military internet of things, combined with the need for a real-time response has challenged system designers to have powerful solutions that fuse these demands.

These include the surge in data at the edge resulting from new sensor and data capture technology. These lead not only to more raw data but also to a growing number of situations with variable inputs that must be resolved quickly. Such complex combinations of data cannot be sent to the Cloud to meet the demands of situations like an immanent vehicle collision or a sudden combat event. As an example, in 2018, only 10% of generated data was created and processed at the edge. By 2025, it is expected to grow to 75%. Processing simply must go out to the edge to meet it without having to transport it to another server environment.

Acromag signal conditioners and network I/O were designed as a military solution that could migrate to a commercial application. It is not common to have a sensor used commercially moved to a military application, but it does occur. Areas such as infrared and LIDAR are examples. The opposite is also true, with FLIR and forward-looking RADAR used in law enforcement. The requirements for military applications start with payload and the ability to get them to the forward posts. They go on from there to address reliability and power in a transportable environment.

This is putting large strains on deployed systems at the edge. But unlike commercial systems, the requirement for a SWAP-C optimized solution is a must. The need for a rich feature set solution that meets environmental concerns along with performance has resulted in the release of an array of cost-effective solutions. The modules needed to be easily configured and be offered in numerous flavors to meet the variety of real-world interfaces addressed. They have to be inherently rugged, avoid the use of ribbon cables, and deal with a wide range of temperatures. They had to have both off-the-shelf solutions as well as be able to be spun up fast for custom applications. The idea of a sensor has been blurred a bit to include almost anything on a battlefield that gives off a digital or analog signal of any kind. But in addition, a whole new range of sensors have also joined the cause that determines system parameters, environmental concerns, spectral analysis, acoustics, biometric, HDS Systems along with many others. This need resulted in an explosion of opportunity to augment the reality for the warfighter in ways never before conceived. It has resulted in compute demands at the edge that combine these sources in a way that combines all relevant data into a cohesive plan.

The examples of applications are many and varied. The use of “wide-area persistent surveillance” sensors on the ocean floor that are dormant until they are needed. The use of a facial recognition sensor that can identify persons 100 meters away that is used to see who is boarding a ship are examples of simple sensor arrays. But being tasked to protect large metropolitan areas where most of the populations live, creates a herculean task. Making matters worse, many of the cities reside in the “Ring of Fire”, a 25,000-mile ring of volcanic activities that is rampant with volcanic eruptions. The fusion of information from the simple “intruder detection” to not miss interpreting an earthquake as an attack is key.

The combination of inputs creates a complex environment tying seemingly unrelated information together in ways not before heard of. And to do this with a time deterministic calculus that will out-strip the advisories communication ability. This calculus may include sensors monitoring corrosion or the likelihood of a systems failure on a weapons platform. It could calculate the potential for a cyberattack in one environment over another.

Acromag signal conditioners and network I/O modules come in numerous popular flavors. They have a family of A to D converters with varying levels of intelligence and sampling rates. They have a family of Digital input and output solutions. Combined with an FPGA platform and their ability to address custom, has created a “toolbox” of solutions that is ideal for the rigors of I/O intense solutions on the front line.