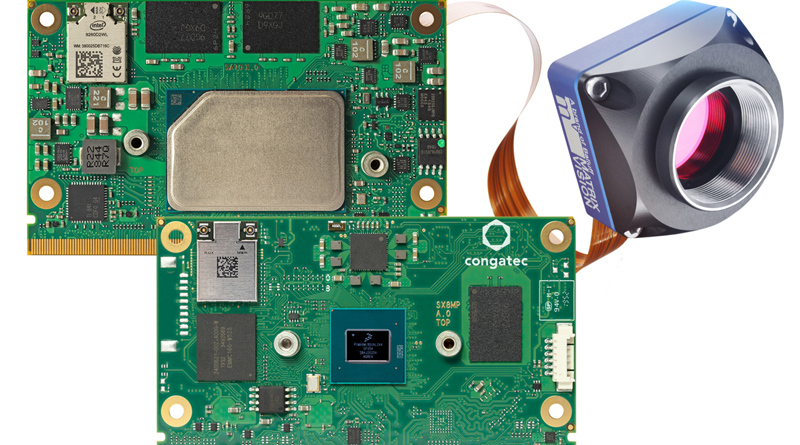 congatec and MATRIX VISION will showcase their new SMARC Computer-on-Module platform with PCI Express (PCIe) based camera module extension for the first time at Vision in Stuttgart. With no overhead and no need for additional interfaces such as GbE, USB, or MIPI CSI, image data are written directly into the RAM of the SMARC module with virtually no latency and higher bandwidth [1]. MATRIX VISION’s Sony Pregius sensor-based camera modules deliver image data to congatec’s Intel Atom processor-based SMARC module at speeds of up to 226.5 frames per second (FPS) and with 1.6-megapixel resolution. Such high-speed transmission enables hard real-time at clock rates of approximately 4 milliseconds. This clocking is also a great fit for actuator commands over TSN (Time-Sensitive Networking) based Ethernet, which provides hard real-time at clock rates <1 millisecond. Typical use cases are found in industrial machine vision applications in electronics and semiconductor manufacturing, the automotive industry, food and beverage, pharmaceuticals, packaging, and printing. Other markets include healthcare, intelligent transportation systems (ITS), as well as airport security and surveillance systems.

“PCIe-based camera implementations are predestined for ultra-low-latency, high-speed, real-time vision applications. One reason is that – unlike GbE, USB or MIPI – there is no overhead in the protocol. Secondly, the interface is always natively supported by the processor, which is not always the case with GbE, USB, or MIPI,” explains Martin Danzer, Director Product Management at congatec.

Developers interested in evaluating the PCIe vision cards of the mvBlueNAOS family in combination with congatec SMARC modules based on Intel Atom, Intel Pentium, and Intel Celeron processors as well as NXP i.MX8 M Plus processors can choose between 6 different camera models with resolutions ranging from 1.6 MP (1456 x 1088) to 24.6 MP (5328 x 4608) and frame rates from 226.5 to 24.1 FPS.