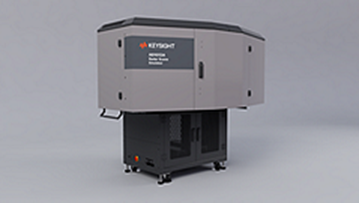 See the big picture: The Radar Scene Emulator allows radar sensors to see more with a wider, continuous FOV and supports both near and far targets. This eliminates the gaps in a radar’s vision and enables improved training of algorithms to detect and differentiate multiple objects in dense, complex scenes. As a result, autonomous vehicle decisions can be made based on the complete picture, not just what the test equipment sees.

Test real-world complexity: Testing radar sensors against a limited number of targets provides an incomplete view of driving scenarios and masks the complexity of the real world. Keysight’s Radar Scene Emulator allows OEMs to emulate real-world driving scenes in the lab with variations of traffic density, speed, distance, and the total number of targets. Testing can be completed early for common to corner case scenes while minimizing risk.

Improved scene resolution: The ability to distinguish between obstacles on the road needs to be tested for a smooth and fast transition towards vehicle autonomy (i.e., Level 4 and 5 autonomy as designated by the Society of Automotive Engineers (SAE)). Keysight addresses this technology gap with point clouds (multiple reflections per object), which improves resolution for each object.

“Keysight’s Radar Scene Emulator offers automotive OEMs a breakthrough solution that will bring the road to the lab through full scene rendering,” said Thomas Goetzl, vice president and general manager for Keysight’s Automotive & Energy Solutions business unit. “The vision of fully autonomous vehicles is rapidly approaching, and we’re thrilled to be accelerating this vision into a reality.”

Keysight’s Radar Scene Emulator is part of the company’s Autonomous Drive Emulation (ADE) platform, created through a multi-year collaboration between Keysight, IPG Automotive, and Nordsys. The ADE platform exercises ADAS and AD software through the rendering of predefined use cases that apply time-synchronized inputs to the actual sensors and subsystems in a car, such as the global navigation satellite system (GNSS), vehicle to everything (V2X), camera and radar. As an open platform, ADE enables automotive OEMs, and their partners, to focus on the development and testing of ADAS/AD systems and algorithms, including sensor fusion and decision-making algorithms. Automotive OEMs can integrate the platform with commercial 3D modeling, hardware-in-the-loop (HIL) systems, and existing test and simulation environments.