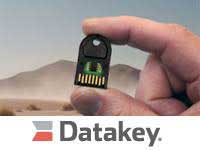 The new Datakey IAT4.5Kb and IAX4.5Kb CryptoAuthentication memory tokens utilize Microchip’s ATSHA204A CryptoAuthentication IC and contain 4.5 kilobits of programmable memory, consisting of a 512-bit one-time programmable zone and a 4096-bit data zone that is divided up into 16 256-bit slots. Each slot can be configured for read-only or read/write access in either clear or encrypted modes. The Datakey IAT10.5Kb and IAX10.5Kb tokens utilize Microchip’s ATECC608A CryptoAuthentication IC. It has similar capabilities to the ATSHA204A but has a 9664-bit data zone and provides hardware support for asymmetric encryption algorithms.

Slightly smaller than an SD card, the proprietary-shaped IAT memory tokens utilize solid over-molded construction using an engineered composite, making them physically robust. The tokens also feature contacts on both sides, so tokens can be inserted into receptacles with either side up. The tokens mate with Datakey SlimLine™ receptacles, which come in both board-mount and panel-mount varieties and are rated for 50,000 insertion/removal cycles.