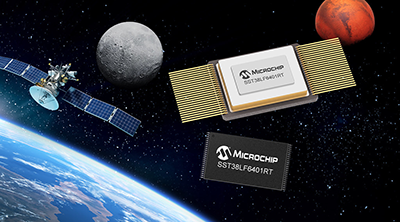 “The SST38LF6401RT SuperFlash device further strengthens our scalable approach to developing total space system solutions using our radiation-tolerant or radiation-hardened microprocessors and FPGAs,” said Bob Vampola, associate vice president of Microchip’s aerospace and defense business unit. “It offers the vital protection these space systems need for the most reliable digital processing where companion Flash memory is required to store the critical software code or bitstream that drives the complete system.”

Radiation-tolerant up to 50 kilorad (Krad) TID, even while the Flash is still biased and operating, the SST38LF6401RT device enables systems to operate in a broad range of space applications where they cannot afford any loss of code execution that could lead to severe defects and system loss. It is an ideal companion to Microchip’s SAMRH71 Arm® Cortex®-M7-based radiation-hardened SoC processor and can also be used with the company’s RT PolarFire® FPGAs to support in-flight system reconfiguration. The device has pinout distribution compatibility with its industrial version for an easy transition to the space-qualified plastic or ceramic versions at the Printed Circuit Board (PCB) level.

The SST38LF6401RT SuperFlash device is sampling now in a ceramic version and supported by an evaluation board and demonstration software, available upon request. Also available upon request is an FPGA flight programming reference case for combining the SuperFlash device with an FPGA and a SAMRH71 processor with supporting software. Voltage operation ranges from 3.0 to 3.6 volts (V).

By selecting relevant devices from its proven automotive- or industrial-qualified product family and adding silicon process improvements, Microchip gives them enhanced protections that make them more immune to single-event latch-up in heavy ion environments. The radiation performance of the slightly modified devices is fully characterized and supported by a dedicated radiation report for each functional block. The devices are used in applications ranging from launch vehicles and satellite constellations to space stations. Designers can begin system implementation with easy-to-source COTS devices before swapping them out with pinout-compatible space-qualified equivalents in high-reliability plastic or ceramic packages.