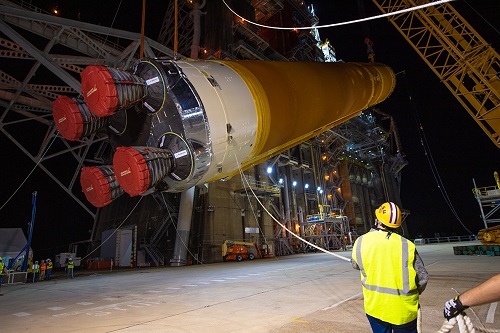 Boeing begins the delivery of the Space Launch System (SLS) rocket cryogenic core stage to NASA today in preparation for the launch of the Artemis I mission, the first moon mission in nearly 50 years.

Boeing refurbished the stage after it successfully completed hot-fire testing last month at NASA’s Stennis Space Center, closing out the Green Run campaign on the B-2 test stand. The flight hardware will now go to Kennedy Space Center in Florida for integration with the Orion crew spacecraft, Interim Cryogenic Propulsion Stage upper stage, and solid rocket boosters in preparation for launch.

SLS will launch NASA’s Artemis I mission that will send an uncrewed Orion crew vehicle around the moon and back. That test flight will be followed by Artemis II, the first crewed lunar fly-by for the Artemis program.

“We thank NASA for their partnership as we deliver the first of the Artemis core stages that will launch a new era of human deep space exploration,” said John Shannon, SLS vice president, and program manager for Boeing. “Boeing shares this achievement with the hundreds of companies and thousands of highly skilled workers who contribute to this program and form the backbone of this industry.”

Boeing is the prime contractor to NASA for the SLS core and upper stages and avionics. The company is joining major elements for the Artemis II core stage now at NASA’s Michoud Assembly Facility in New Orleans.

“Data from Green Run testing validated the core stage’s successful operation and will be used to help certify the stage for flight, as well as to inform our production system for future stages,” said Shannon.

Boeing also is working on evolvable capabilities for the rocket system such as the Exploration Upper Stage (EUS), which is entering production at Michoud. The more powerful SLS with EUS will be able to lift three times as much mass to deep space as any other rocket, enabling sustainable, crewed, and uncrewed exploration, science, and security missions. SLS’ evolved capability to transport massive payloads in a single launch reduces mission complexity and risk while increasing safety, reliability, and probability of success.