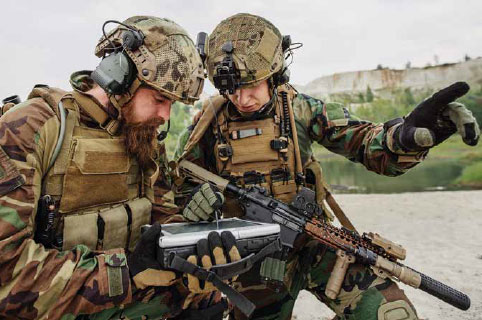 The ability to spoof or jam GPS signals continues to evolve and challenge our most advanced weapon systems. The ability to determine an exact position on the world’s surface is a modern marvel, but it has also challenged those that don’t wish to be located. For a modest sum of around $10.00, US truck drivers can jam their location being transmitted to their employer. The ease and frequency that jamming and spoofing are occurring have led Spire, to develop techniques in detecting both the erroneous signal (the spoofing) or the site of the transmitter that is jamming. They mention two examples where our most modern USAF F-35 Airplane flown from Israel experienced a jamming incident over Syrian airspace; and a NATO training exercise where tens of thousands of troops and dozens of member nations all fell prey to jamming.

C4ADS is a nonprofit organization dedicated to providing data-driven analysis and evidence-based reporting in conflict areas involving transnational security issues. In a recent report, they describe how the Automatic Identification Systems or AIS used universally as a maritime security tool was spoofed. The AIS system transmits vital data regarding a ship’s position, heading, and speed as well as owner and cargo information. What they found was that hundreds of ships were spoofed while navigating Chinese waters. Using a jam-then-spoof strategy in which a false signal is broadcast at a significantly higher power level with the counterfeit signal aligned with the true signal, and created mass confusion. In this event, the GPS signals were congregated into large circles called Crop Circles that created confusion.

One solution is Spire’s constellation of CubeSats that carry flexible, Software-defined radios or SDRs that can be harnessed for geolocating signals of interest. The Spire GNSS reflectometry (GNSS-R) instrument is a flexible SDR receiver mated with two high-gain nadir-oriented L-band antennas that can capture both raw recordings and make precise measurements of GNSS signals emanating from the Earth’s surface. This enables Spire to identify false signals and their point of origin with accuracy. Although significantly easier to use two or more satellites to identify an emitter, Dr. Patrick Ellis of Spire published a paper describing how it is possible to use a lower-cost, single satellite solution. By using a two-step RF emitter geolocation process chain that calculates Doppler and Doppler rates he can calculate these measurements to the location of an emitter. Spire was able to demonstrate its multi-satellite solution to the US government in the second quarter by correctly identifying the jamming signals from designated test locations.

As Artificial Intelligence and other mission-critical capabilities rely on GPS, the need for confidence between the warfighter and modern technology will increase. The ability to thwart any attempt to disrupt GPS will be key in obtaining the upper hand moving forward with JADC2. Spire offers solutions and can be reviewed at https://spire.com/