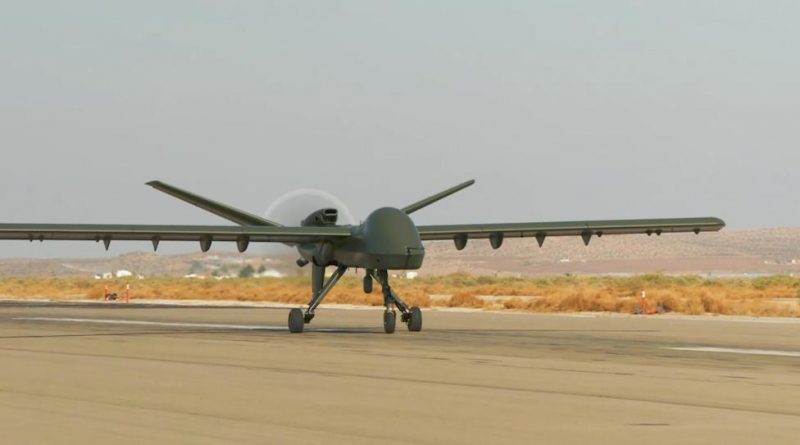 General Atomics Aeronautical Systems, Inc. (GA-ASI) is unveiling a new Unmanned Aircraft System called Mojave, named for one of the harshest and most austere areas of the world, where deadly rattlesnakes and horned lizards adapt to survive the extreme forces of nature.

Mojave is based on the avionics and flight control systems of MQ-9 Reaper and MQ-1C Gray Eagle-ER but is focused on short-takeoff and landing (STOL) capabilities and increased firepower. It features enlarged wings with high-lift devices and a 450-HP turboprop engine.

Mojave provides options for forward-basing operations without the need for typical airport runways or infrastructure. It can land and take off from unimproved surfaces while also retaining significant advantages in endurance and persistence over manned aircraft. These innovations make Mojave the perfect UAS to perform armed overwatch, attack, and armed reconnaissance missions.

A prototype aircraft first flew this summer and is continuing to demonstrate exceptional short-field performance and other unique qualities.

“We’re proud to bring these extraordinary capabilities to our Predator line of UAS,” said GA-ASI CEO Linden Blue. “We are providing the ground forces with a long-endurance, armed overwatch UAS that can quickly reload weapons at austere sites, located close to the conflict zone. This revolutionary design, based on 7 million flight hours of UAS experience, increases expeditionary employment options – making Mojave a real game-changer.”

GA-ASI’s history in UAS technology is second to none and is continually pushing technologies to adapt to emerging threats. Predator-series UAS have evolved since their support of the U.S. war effort following the 9/11 terrorist attacks in 2001 to become not only a critical provider of Intelligence, Surveillance, and Reconnaissance (ISR), but also provide kinetic and non-kinetic capabilities to neutralize threats and achieve overmatch.

The Mojave project brings together all the best of the proven technologies for employment, sustainment, and production, and capability to achieve industry-leading reliability, range, and endurance. STOL capability increases the number of employment options available to Mojave, potentially including aircraft carrier-based options, unlocking naval missions, or sea-based support for special operations forces.

The payload capacity is 3,600 lb. (1,633 kg) and Mojave can carry up to 16 Hellfire or equivalent missiles. Mojave can be equipped with a sensor suite including Electro-optical/Infrared (EO/IR), Synthetic Aperture Radar/Ground Moving Target Indicator (SAR/GMTI), and Signal Intelligence (SIGINT) to support land or maritime missions.